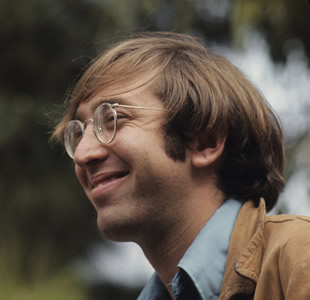 Waqidi grew up in Levittown, the first suburb of NYC.  He first learned to play guitar around his junior year in High School (1961), having been inspired to play by his friend, Ken Hoopes, an accomplished guitarist and folksinger.  Waqidi’s first time playing in front of an audience was on his high school stage (General Douglas MacArthur HS) with a group called the Salisbury Singers, which was comprised of Waqidi on guitar, and three other students from the school.  The group included Craig Uhran (banjo), who Waqidi is still friends with, and two brothers, Adam and Andy Rosenblatt.  The striped tee shirts the group wore were reminiscent of those worn by the Kingston Trio (KT) and other “KT copycat” groups of that era.  Craig, an attorney based in Houston, still plays banjo and guitar and is an accomplished singer songwriter.

Ken Hoopes introduced Waqidi to a variety of styles including those that employed the so-called “open” guitar tunings that were invented around that time.  Fortunately, Waqidi was also close to NYC and used to go down to Greenwich Village to watch and jam with other musicians/singers (including a then unknown Dylan) at such folk clubs as the Café Wha and Gerdes Folk City.  He later joined with Hoopes in a group called the Wayfaring Strangers, which played at the Bitter End (following a young Woody Allen) and in other venues in the New York/New Jersey area, including opening for Tom Rush.

In 1962 Waqidi (then called William Faliks) attended SUNY at Stonybrook where he met Jay Rosenberg.  The two published nine songs with Pera Music (now Peermusic) in 1964 and sometimes performed as a singing comedy act, opening in one instance for Raphael “Ray” Boguslav.  At 18 Waqidi composed and played the music for one of the first short films made by the famous filmmaker Ed Emshwiller, George Dumpson’s Place (the original showing of the film won an award in 1963).  His music was unfortunately lost by Emshwiller (the tape was accidentally erased) and later released with the music of a different composer in 1965.1 In late 1964 and early 1965 Waqidi was a guitar instructor at a music store in Ramsey, NJ (having left the Pratt Institute architectural school after the first semester of the fall 64 term).   The music store owner, without telling Waqidi, signed him up for a flamenco guitar concert for a prestigious venue in New York City that included several respected flamenco guitarists. Waqidi was forced to put together a flamenco guitar composition without any experience in this style (He was after all a folk music style guitarist and had no formal training in guitar much less classical or flamenco guitar).  Although the memory of this experience fortunately has long faded away, Waqidi did manage to have a remnant of that “night’s performance” remain with him for several years.  (See the musical composition titled “flamenco” on the compilation Stony Brook Days.)

Shortly after going back to Stony Brook University in 1965, Waqidi hooked up with a fellow student, Bill Laletin, to form a duo, at times called “Bill & Willie” (by the music reviewer for the university paper, The Statesman, Jim Frankel) and finally “Abelard  & Dr. Jones”.  They performed primarily at the university.2 They also performed on an ABC documentary on university life as well as performing as a trio with a girl student at the university (who left to get married).  Waqidi also performed with others at the university including, a fellow student, Jeff Kagel, the now famous Kirtan singer, Krishna Das.   Mostly Bill and Waqidi stayed in the folk music genre (Bill still has a list of the songs in their repertoire).  However, on at least one occasion the two went electric with several other student performers to perform more in the folk rock style that was popular at the time (such as Jessie Collin Young’s “Get Together” and the early Bee Gee’s “New York Mining Disaster”).  In one concert the extended group opened for the rock group “The Soft White Underbelly” (later to become the Blue Öyster Cult).  The common connection between the two groups were the students, Sandy Pearlman (he later became the manager for the BÖC) and Richard Meltzer (famous for his early work “the aesthetics of rock” and other works see Richard Meltzer wiki) as they both were involved with booking the acts for the concerts.   In addition, these two, like Waqidi, were philosophy majors and in many of the same classes and knew each other.

In 1969 Waqidi decided to leave his computer science job in the NYC area to become a professional musician/singer songwriter.  He sold his Les Paul Junior guitar for $100 (for gas money) and travelled to LA, where within a short time he became the lead guitarist for Hamilton Camp. (He also performed one time as the guitarist for Penny Nichols, a lesser known but very talented singer songwriter from that era.)3 Camp’s name for Waqidi was “fingers Falicoff” (apropos based on his finger style playing).  Waqidi’s main guitar was a Martin D12-35 12 string (and an all-mahogany Favilla classical guitar, which he bought when living on Long Island, NY).    It was only many years later that Waqidi learned that Camp’s previous guitarist to him was the famous, Dick Rosmini, who together with Leo Kotke, were the best 12 string guitar players at the time.  This was fortunate as it would have been much more difficult to be “in the shadow” of this great musician, who inspired even the more famous Kotke (see Leo Kottke’s Travels with Guitar and Voice).

Hamilton (with Waqidi on backup guitar) performed Camp’s Pride of Man” on the Feb. 21, 1970 KABC TV Show “The Murray Roman Special” – (See video of this performance starting at 20:47) which included such diverse acts as Nancy Sinatra, Frank Zappa, Linda Ronstadt and Donovan. A notable experience for Waqidi occurred during a backstage wait for the show, when Camp and Donovan compared their musical adaptations of the poem “The Lake Isle of Innisfree”, by William Butler Yeats.4   In April 1970 Hamilton and Waqidi performed at the LA area folk club, Artie Fatbuckles Cellar with Raphael Grinage on cello. A review of that performance in the Los Angeles Free Press was recently sent to Waqidi by Jason Smith, who has done a thorough history of that club.  The reviewer was not sure of Waqidi’s name and called him “Joachim Something”.

Loren Pickford was the fourth to join with Camp, Falicoff  and Grinage to form the group, The True Brethren (which sometimes performed under this name or under the banner of the more famous name of Hamilton Camp).  The “original” group performed mostly in the Southern California region, including venues such at The Golden Bear (a lesser known at the time Jackson Browne opened for us) and The Coach House (opening for Sunny Terry & Brownie McGhee”) and The Four Muses.  Camp with Falicoff also played at the Los Angeles Troubadour (billed as Hamilton Camp) in March of 1970.5 Opening for the group was Dillard & Clark6 (respectively an ex-Dillard and ex member of the Byrds).  Waqidi got to meet and jam with Doug Dillard during this time period.  The largest venue for the group was at the Santa Monica Civic auditorium, where it opened for Hoyt Axton and Arlo Guthrie. The four members of the group co-wrote the music for the show Story Theatre, which was first performed in the Mark Taper Forum in LA (Waqidi sang and played guitar in the show), and later went to Broadway, winning 2 Tony awards, as well as being nominated as “Best Show” (1971).   In the initial venue in LA, the show’s director and creator, Paul Sills, from the Chicago Second City, was helped by his mother, Viola Spolin, who provided “improv” training sessions to all the performers (including Waqidi who was an understudy for the acting role of Camp for one scene).   Here is the credits page. 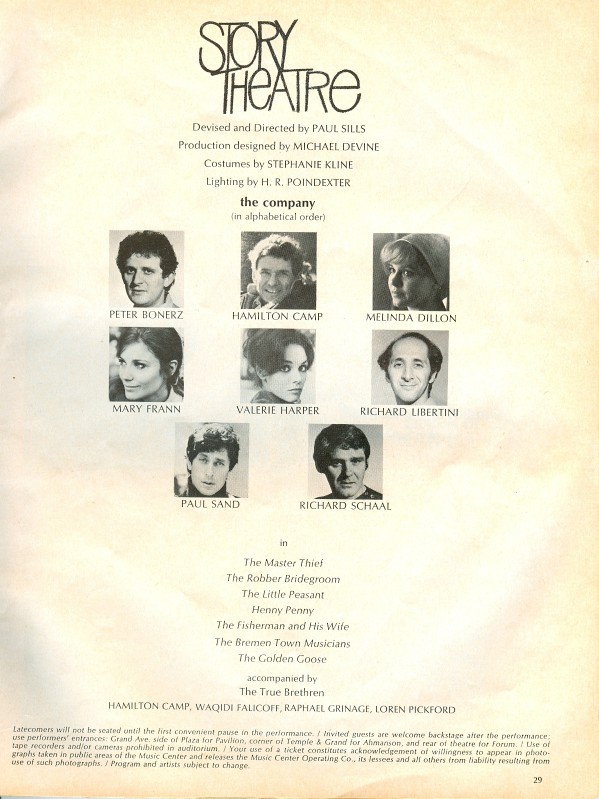 And below to the left is a review from The Poly Post on July 22, 1970, which mentions Waqidi’s performance in the Mark Taper Forum production.   (More on Story Theatre in an upcoming post in the Stories page.)

Waqidi left the group before it went to Broadway (Lewis Ross took Waqidi’s place in the group) to  travel with his then wife (Snow of the folk duo Blackburn & Snow). The two performed in several venues including a memorable performance on Indonesia television.  During his time in Indonesia Waqidi also wrote and performed a commercial for Bata shoes.   The two eventually settled in London, where Waqidi finished his graduate work at the Architectural Association.  A picture of the two can be seen below in 1971 with Jay Rosenberg at Jay’s house in Maryland.

In 1973 he met up with Top Topham, and with other singers and musicians in London, played at a variety of venues including the famous Troubadour.  In 1974 Waqidi signed a songwriting and recording contract with EMI Music (EMI Robbins Group).  He, together with Hamilton Bailie and Helen Tarantino, formed the group, Patchwork Triangle.  The EMI-signed group recorded a number of demo songs which were never released.  The sessions were supported in the studio by Topham (guitar), vocals Snow (no longer married) and Laura Bailie, Maurice Isaacs (violin), and Ellis Rich, OBE on the piano (then at EMI).  These studio recording are now released for the first time, together with home recordings with other performers (Reynard Falconer, piano).  Waqidi has made available for the first time, the only known recordings of the “original” True Brethren, which are available in the 4 song “Sunrise” compilation.

1. Credit is given to Waqidi (under his birth name Ken Faliks) as the composer for the film in the book “Film Composers in America, A filmography 1911-1970  by Clifford McCarty
2. A review of Bill & Willie can be seen in the Stony Brook U. paper “The Statesman” from Feb. 1968 HERE  and as Abelard and Dr. Jones HERE
3.  The website of Penny Nichols
4. Camp’s version of the poem is on the “Sunrise” compilation on this website.
5. Image of the ad in LA times for this gig at the Troubadour is no longer available on internet.
6. The Wikipedia entry for Dillard and Clark